Since no one else seems to be using the language, I think it is OK for me to develop it. The language doesn't have enough vocabulary, and some of the features the language originally had could be improved and simplified. For example, there is a singular and plural form of 'the,' and also there are three different plural forms, not including the transformation of 'mann' to 'menn' to form the plural.

As a language with virtually no speakers, I don't think Amerysk needs additional complications. The creator of Amerysk probably did not even know about Esperanto, and so did not know ways to simplify a language that Esperanto uses.

I see Amerysk as a Germanic regional International Auxiliary Language, much as Folkspraak/Folksprak aims/aimed to be. English and the other Germanic languages have many non-Germanic loan-words, often from Latin. Amerysk is a chance to get a break from those non-Germanic words, and to experience a Germanic language as it would have been before those loan-words were taken in, and often began to dominate.

Will anyone other than myself use Amerysk for anything? It's possible, though not certain. People keen on Germanic languages can always learn Anglo-Saxon or Old Norse. People who want an International Auxiliary Language can always pick the most successful such language, Esperanto. And people who just want to learn a language to connect with other people could learn English, Chinese or Arabic--- all widely-learned languages.

I am beginning work on a dictionary of Amerysk which will be posted on this blog. I am also working out some reforms and simplifications of the language which will also be posted.

One issue is whether the name 'Amerysk' should continue to be used for the language. I'm thinking that giving it a new name might clear up any problems as to the rights of the creator of Amerysk. I cannot publish anything about the language as long as it is the intellectual property of the creator of Amerysk. Maybe it should be 'Folksnaekk?' As a tribute to the Folksprak project?

My ruling plan for the Amerysk/Folksnaekk language is to make it into a simple conlang, kind of like what Esperanto would be if Esperanto had purely Germanic roots. Primary source would be the Anglo-Saxon language, but other Germanic sources are probable.


Posted by Nissa Annakindt at 5:46 AM No comments:

Posted by Nissa Annakindt at 9:04 AM No comments:

stagga - stag
swefan - to sleep
swift - fast, swift
Posted by Nissa Annakindt at 9:02 AM No comments:

Amerysk is a conlang (constructed language) created by Paal Filssunu in 1978. It was meant to give English-speakers in North America a more Germanic language experience, since Modern English has so many Latinate and other non-Germanic loanwords. The creator and early users of the language were Odinists (Norse Neopagans.)

Folkspraak began in 1995, and is meant as an inter-Germanic language. There are several variants of Folkspraak. See the Wikipedia article: https://en.wikipedia.org/wiki/Folkspraak

It is traditional to 'road-test' a conlang by translating the Our Father, or Lord's Prayer. This is not only a good test, it's practical. Christian users of the conlang--- and others who pray--- can use the Our Father in prayer.

Here is the Our Father in Folkspraak.

Amerysk does not have an Our Father translation that I know of. Or a translation of any Odinist prayer or proverb. Good things for Odinists to translate can be found in the Poetic Edda. I am going to be translating the Our Father into Amerysk, and the Hail Mary prayer as well And maybe the Glory Be, for that matter. (As you may have guessed, I am now Catholic.)

I need the text for a science-fictional story I am writing, in which an order of Catholic brothers prays the rosary in a variety of conlangs, including Universalglot, Volapük, Esperanto, Ido, Slovio, and, of course Amerysk. Once I translate something for it, anyway.

Is anyone other than myself interested in Amerysk? Probably not. I searched on Duck Duck Go, and everything I found was something I put on the internet myself. I found Amerysk by accident. When I was an Odinist, I met a fellow Odinist and he showed me some old Odinist papers he had. A booklet on Amerysk was among them. I thought it was my responsibility to put these things up online, since I didn't know if anyone else even had these papers.

I have an interest in conlangs, especially unusual ones. I want to do my bit for Amerysk. I am going to fix up this blog a bit, do some translating of stuff into Amerysk, and help anyone who wants to learn or use the language.
Posted by Nissa Annakindt at 5:29 AM No comments:

Email ThisBlogThis!Share to TwitterShare to FacebookShare to Pinterest
Labels: Folkspraak, Our Father

The word bærn means a child of either sex. It is similar to the Scottish dialect word 'bairn', which has its roots in the Anglo-Saxon word 'bearn'. In original Amerysk the word was both singular and plural, but now it takes the universal plural ending-as.

The woman has five children.
A child is a little human being.
That little child is a boy.

Email ThisBlogThis!Share to TwitterShare to FacebookShare to Pinterest
Labels: word of the day

Taken from the Anglo-Saxon word 'cwen' which is the source of the word 'queen', and related to the Swedish word 'kvinna'. The 'j' is pronounced like English 'Y' in 'yarn'. In Amerysk -ja is the normal feminine ending.

I see a woman.
Mrs Wolf is a woman.
Mr Wolf is a man.
The woman has eight cats.
Posted by Nissa Annakindt at 7:00 AM No comments:

Email ThisBlogThis!Share to TwitterShare to FacebookShare to Pinterest
Labels: word of the day
Older Posts Home
Subscribe to: Posts (Atom) 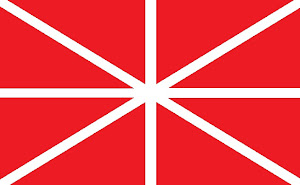 A flag to symbolize our Amerysk language

Nissa Annakindt
Published poet, writer and blogger. My cats are conspiring against me. My main blog is: https://myantimatterlife.wordpress.com/ and I do IWSG there.